Former Headmaster was a War Hero! 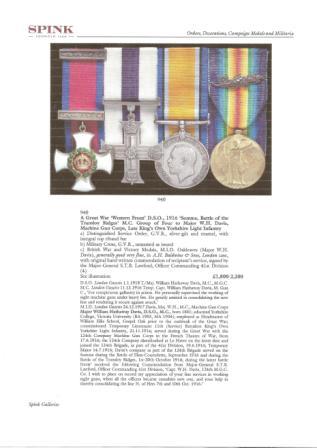 One of the School 'Houses' was named after him and his picture appeared for a long time in the school vestibule (you can see a reproduction in Gallery 1) but very few of us realised that a former headmaster, William Hathaway Davis had a distinguished war record.

Davis was born in 1881 and was educated in Hull so he would have been 32 when WW1 commenced and presumably joined up fairly early. In 1916 he was a temporary Captain in the 124th Company of the Machine Gun Corps at the Battle of the Somme. Towards the end of the year in the second week of October 1916 he took part in the battle of the Transloy Ridges. All the company officers became casualties and he took charge. The official citation in the London Gazette for the award of the Military Cross had been approved by Major General STB lawford OC 41st Division and read,

"For conspicuous gallantry in action. He personally supervised the working of eight machine guns under heavy fire. He greatly assisted in consolidating the new line and rendering it secure against attack".

In January 1918 Davis again appeared in the Gazette when he was awarded the Distinguished Service Order (DSO) second only to the Victoria Cross in 'seniority'. Unfortunately we have yet to discover the citation for this award. Davis was appointed Headmaster at WES in 1919 and he remained until 1928 when he moved to Plymouth College. Unfortunately he died shortly afterwards aged only 47. Perhaps there was some war wound which hastened his demise but we will probably never know.

However Old Elysians Executive Committee member Chris Willey added an interesting and possibly sad postscript when he came across an advertisment for Davis's medals which were for sale at Spinks & Co in 2009. This was a page from a catalogue of sale showing Maj. Davis's mounted medals with a biography and details of the award which is reproduced above. This is copyright Spinks&co and will be removed on request by the copyright holder. A bigger version (in which the text is readable) can be seen in Gallery 1.